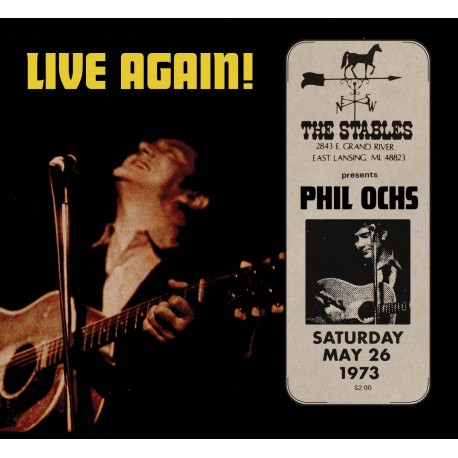 Phil Ochs Live Again At The Stables, Saturday, May 261973

Considering his stature and impact during his lifetime, there is surprisingly little of Phil Ochs’ music currently in print. Aside from a couple of bootlegs, there’s only a handful of his studio albums available on CD today, so this newly-discovered concert board tape is a welcome addition to his slim recorded legacy.

Philip David Ochs was born on December 19, 1940 in El Paso, Texas. A nascent interest in music grew to full strength when his Ohio State College roommate Jim Glover, of the folk-pop duo Jim & Jean, encouraged his guitar playing and opened him up to what was going on politically in the country. He moved to New York in 1962, joined the fledgling Greenwich Village folk scene, and started writing songs with a decidedly leftist political slant, some humorous and others with a biting, almost vicious intensity. His talent stood out from the clutch of other struggling young writers, and by 1964 he had albums out on three different labels. Folkways issued a compilation called Broadside Ballads, on which Ochs had one track (as did his contemporary Bob Dylan, under the nom du disque Blind Boy Grunt); Vanguard had recently issued its landmark New Folks album, on which Ochs had a handful of songs as well as the previous year’s Newport recordings which contained two of his songs from the Topical Songs workshop; and Elektra had just released his first solo studio album, All The News That’s Fit to Sing. For a young man only two years on the scene, he was making quite an impression.

From then on it was politics and music, inextricably entwined, and he sang at concert halls, coffeehouses, political rallies, freedom marches and nightclubs. He was part of the crew of zanies who nominated a pig for President in the wild 1968 election fracas that also found him singing at the Democratic National Convention. More studio and live albums followed, but gradually a paralyzing depression overtook him, and the songs were fewer and harder to come by. He was mugged during a 1974 trip to South Africa, and the injuries left his vocal cords badly damaged. Unable to write and unable to sing, he drifted deeper into depression, and finally took his own life on April 9, 1976 at his sister’s house in Far Rockaway, NY at age 35.

On May 26, 1973, as part of a tour that also included stops in Washington, DC, Philadelphia and Chicago, Ochs performed at The Stables in East Lansing, MI. As its name indicates, the low cinder block building had been converted from a riding stable, so it was a good-sized room; a longtime attendee of the club remembers that it was “a student hangout that reeked of fried food (steak sandwiches were their specialty), cigarette smoke and beer.” There was a bar, a small elevated stage and a large number of tables and chairs; the club booked a variety of folk and blues artists including Muddy Waters, Country Joe & the Fish, Luther Allison and Buddy Guy & Junior Wells. Given the college town roadhouse honky-tonk atmosphere, it seems an odd venue for a quiet solo singer and guitarist like Phil Ochs. But the audience had clearly come to hear him; they applaud when they recognize the first lines of songs and laugh at his jokes, particularly the political jibes. The material is drawn from his already vast back catalog, and ranges from the political tomfoolery he did so well, like “Here’s To The State Of Richard Nixon” and “Is There Anybody Here?” to the hard-hitting intensity of “Crucifixion” and “Outside Of A Small Circle of Friends.” And, thankfully, there’s also a splendid, heartfelt version of one of his loveliest songs, “Changes.” The final bonus track, “Ballad Of The Carpenter,” is not from the same concert; it was recorded at the Quiet Knight in Chicago.
Some belated recognition did come in the years following his death. There were several Greatest Hits compilation CDs issued, and a documentary about his life, titled There But For Fortune, aired on PBS as part of the acclaimed American Masters series, and is now available on DVD. But his greatest legacy remains his music, and this new release brings forward some additional and previously unheard additions to that gift.