> Music>Doc Watson: Sittin' On Top of the World
New 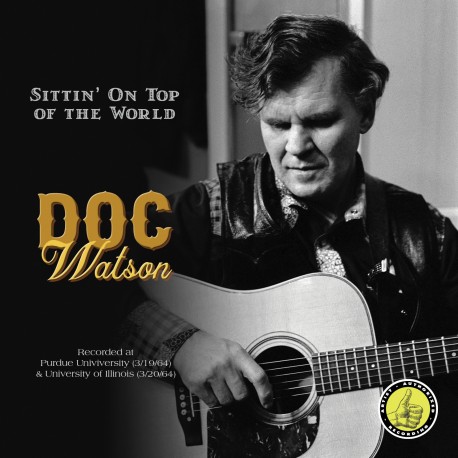 Doc Watson: Sittin' On Top of the World

Arthel Lane “Doc” Watson (March 3, 1923 – May 29, 2012) was an American guitarist, songwriter, and singer of bluegrass, folk, country, blues, and gospel music. His flatpicking skills and knowledge of traditional American music were highly regarded and he often performed with his son, guitarist Merle Watson, until Merle’s death in 1985, the result of a tractor accident.
The early loss of his vision to an eye infection did not hinder Doc Watson’s development in fingerpicking and flatpicking, where he was especially influential. His guitar playing skills, combined with his authenticity as a mountain musician, made him a highly influential figure during the folk music revival of the mid ’60s. Watson pioneered a fast and elegant bluegrass lead guitar style including fiddle tunes and cross picking techniques which were adopted by many others.
Watson recorded his first solo album in 1964 and began performing with his son Merle, age 15, as rhythm guitarist, later that same year. This recording was made at a critical time in his career, prior to Merle joining him, so you have a unique opportunity to hear Doc Watson perform solo, without anyone accompanying him.
As a result of the resurgence of interest in folk and bluegrass music, Doc was invited to appear at the 1963-64 Newport Folk Festivals and he performed at Town Hall in NYC in 1963 with Bill Monroe
This revival of interest was often manifested by enthusiasm for the genre on college campuses, which led to these amazing and rare 1964 performances recorded at Purdue University on March 19, and the University of Illinois March 20.
Over his career, Watson won seven Grammy® Awards, a Grammy® Lifetime Achievement Award, was awarded an honorary Doctor of Music from Berklee College and the National Medal of Arts from President Bill Clinton in 1997.