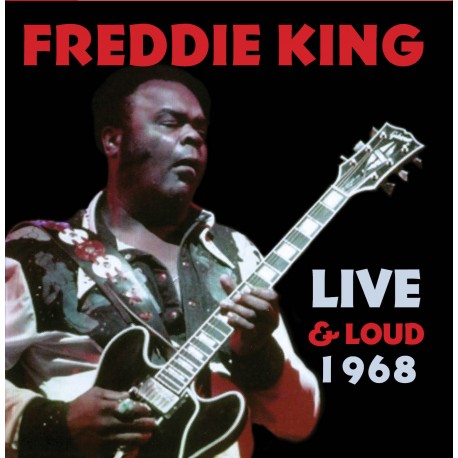 Freddie King was considered one of the most influential guitarists in the 1950s and 1960s and one of the three kings of the blues.

Freddie King (spelled Freddy on King and Federal labels) was considered one of the most influential guitarists in the 1950s and 1960s and one of the three kings of the blues. His signature style was evident and identifiable to virtually anyone who was listening to R&B radio during that time. His biggest hits were “Hideaway,” “San-Ho-Zay” and “See Saw Baby” all in 1961. His muscular style of guitar playing combined with his fierce tenor vocals made him very popular on the blues circuit throughout the mid 1960s. His other signature songs were “Have You Ever Loved A Woman” and “Key To The Highway” were staples for Freddie over the years. From Texas, Freddie’s sound is emblematic of urban electric blues and he ranks up there with T-Bone Walker as one of the most important Texas bluesmen. He had hits with King/Federal Records. His albums were considered bestsellers for the Cincinnati label.
His move from Texas to the South Side of Chicago helped develop the style he is known for today. His first records were for the El-Bee label and in 1956 he had his first hit with “Country Boy,” a duet with Margaret Whitfield. It was Sonny Thompson, musician and A&R man for King Records that introduced him to Syd Nathan, owner of the label. When Freddie’s contract ran out, in 1966, he went to Cotillion and RSO Records. His comeback album was the Don Nix produced, Getting Ready. Featured on that album were “Going Down” and Palace Of The King.” While A&M was focusing on pop artists, Freddie go a lot of airplay on fledgling FM radio stations and was now being billed with major artists at the Fillmore East and West. Suddenly there was a resurgence in the Blues and Freddie was at the forefront, appealing to “hippie” audiences who readily accepted him as one of their own.
Freddie was constantly touring America and Europe. Finally at age 42 he died of pancreatitis. The long hard road took its toll. Freddie will always be fondly remembered for his distinctive blues style. He was impeccable in every way from singing, playing and the way he dressed.
Here, we have Freddie, fierce and low-down at the Fillmore West. Certainly, this is not a perfect recording. Freddie is a bit “off mike,” but what it does give you is an intensity rarely heard in live recordings...the power of his guitar playing never sounded better. Here is a concert that really showcases how powerful he was. That thick sounding guitar was connecting with the hippies who came to love him. And why not, blues was the basis for Rock & Roll. Janis Joplin was topping the charts with her album Kosmic Blues. San Francisco was embracing the blues in a big way. There was a revival with British and American bands revitalizing the genre. Well, as the song says, “Ain’t Nothing Like The Real Thing.”
Well, are you ready for Freddie? Here he is LIVE AND BOLD.